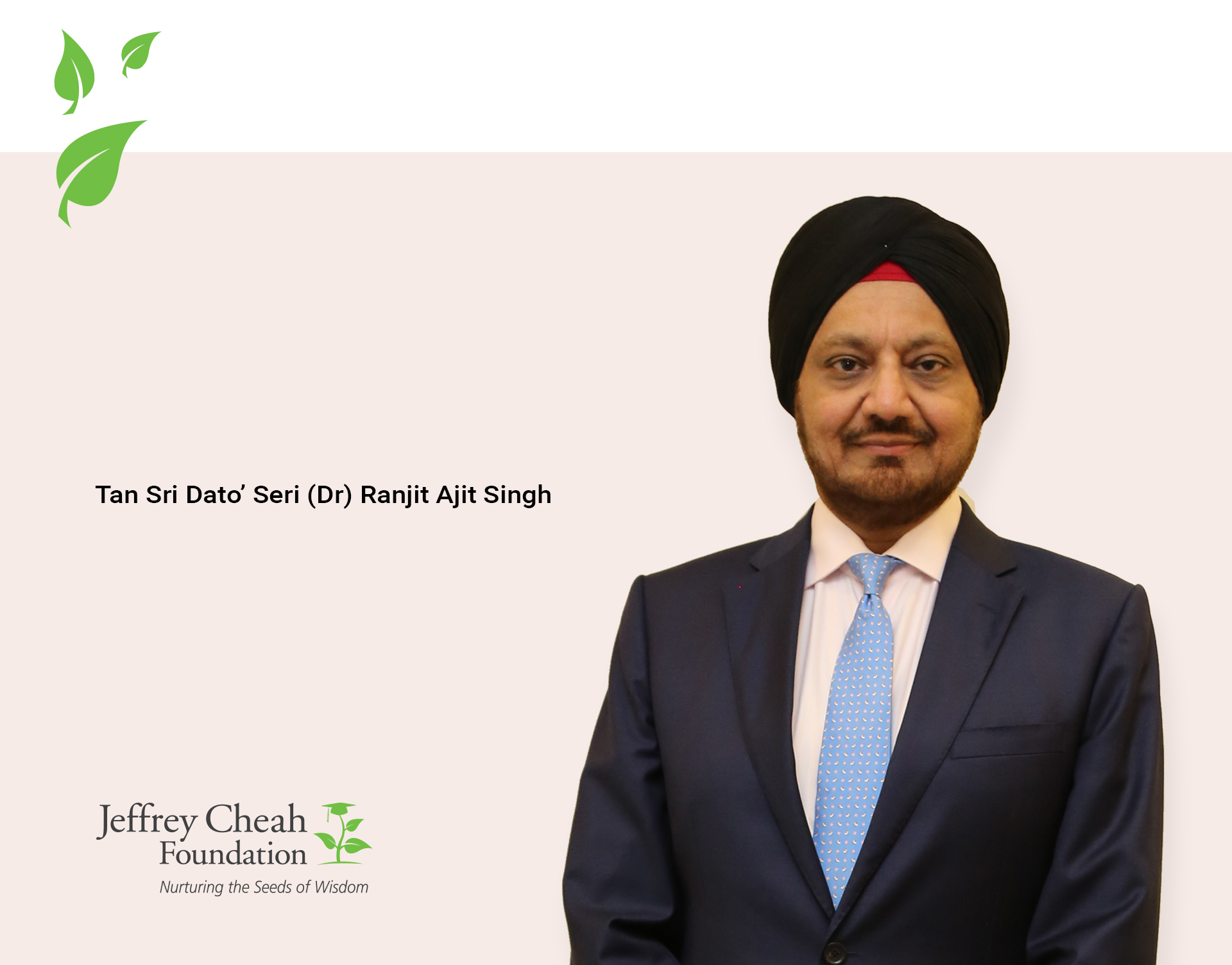 Tan Sri Dato’ Seri Ranjit Singh A/L Ajit Singh was appointed to the Board of Trustees of Jeffrey Cheah Foundation on 22 Jul 2020.

With over 25 years of experience in global market development, policy and regulation, and with a strong focus towards Emerging Market countries and Asia, Tan Sri Dato Seri (Dr) Ranjit Ajit Singh is an experienced international policy maker. Most notably, he was Vice Chairman of the Board of International Organisation of Securities Commissions (IOSCO), the global body of regulators in Madrid and Chairman of its largest committee on Growth and Emerging Markets with 110 countries in 2013. He was also Chairman of the ASEAN Capital Markets Forum, as well as Executive Chairman of the Securities Commission Malaysia.

Currently, he is Partner and Director of Centennial Group International (CGI) Washington D.C. and Head of Global Markets. He is also an expert advisor to the International Monetary Fund and sits on the International Advisory Boards for capital markets of several countries. He is also a Member of the Leadership Council of the United Nations Sustainable Development Solutions Network Malaysia, and Member of the Board of the Institute of Integrity and Fellow of the Institute of Corporate Directors Malaysia.

In addition to his academic achievements – which include a Bachelor of Economics with Honours, Masters of Economics in Finance, and the Doctor of Laws honoris causa – the highest degree of Monash University, Melbourne, he also has a strong interest in academia and has taught at Australia’s leading universities, which are the aforementioned Monash University and the University of Melbourne.

He is a strong advocate of continuous learning and has championed capacity building and knowledge development efforts for the past two decades, and done so by establishing the world’s first IOSCO capacity building hub for Asia Pacific in Malaysia, serving as Chair of the Securities Industry Development Center and Vice Chair of the Asian Institute of Finance. He also established the Institute of Capital Market Research in Malaysia, initiated the ASEAN capacity building program, and has given numerous lectures at leading academic and research institutions as well as Think Tanks globally and published papers on finance and markets.

In recognition of his contributions to the nation, he was conferred the title of “Dato Seri” in 2015 by the Sultan of Perak, and the title of “Tan Sri” by His Majesty the King of Malaysia a year later. Besides that, he was awarded for “Most Outstanding Contributions to the Development of Islamic Capital Markets” by the London Sukuk Summit in 2016. Tan Sri Dato Seri (Dr) Ranjit was also recipient of “President’s Award for Excellence in Leadership” by CPA Australia in 2012.