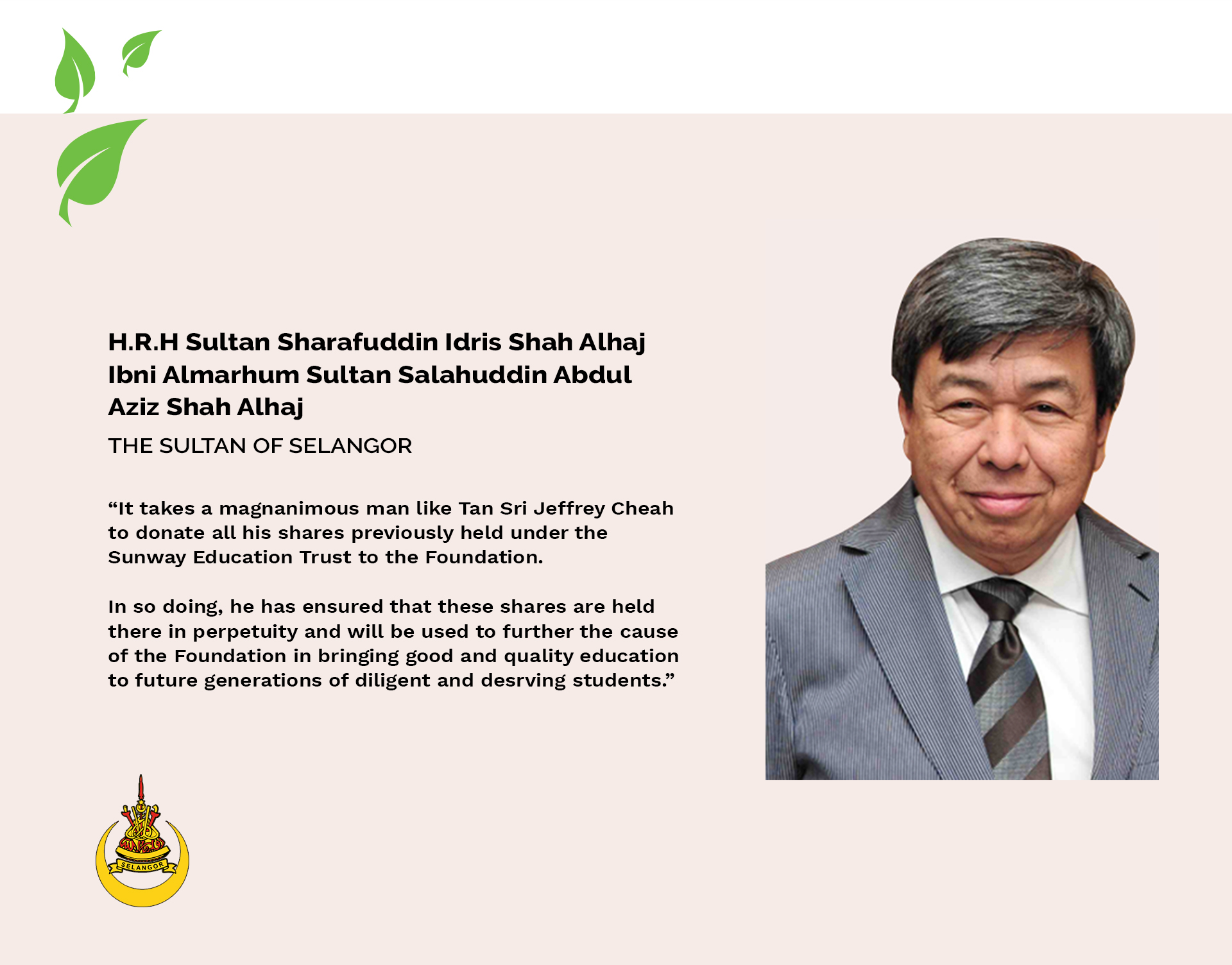 His Majesty received his early education at Raja Muda Secondary School, Kuala Lumpur and St. John Institution, Kuala Lumpur from 1954 to 1959. In 1960, he continued his studies in Perth, Australia until 1964 and continued his studies in England until 1968. In the same year, he returned to his homeland and served in the Government Administration where his first service was in the Office of the Selangor State Secretary. He also possesses a vast knowledge and experience in the field of administration as he served in the Kuala Lumpur District Office and the Royal Police Department, Kuala Lumpur.

His Majesty was awarded Degree of Relatives (Most Respected) Selangor in 1973 and the First Order of Merit, Seri Paduka Mahkota Johor (SPMJ) in 1975. He was also awarded Degrees of Relatives from the states of Terengganu, Kelantan, Perak, Perlis, Negeri Sembilan and Kedah.

In 2002, he was the first holder of Dato ‘Setia – Sultan Sharafuddin Idris Shah (S.S.I.S.) Order of Merit. During His Majesty’s coronation as the 9th Sultan of Selangor, he was also awarded Seri Mahkota Negara (D.M.N.) Master Degree by His Majesty the Yang di-Pertuan Agong.

Other accomplishments include having His Majesty’s name engraved in the “Malaysia Book of Records” as “The First to Sail Around the World” and “The First to Complete the Peking-Paris Motor Challenge” in 1998.

His Majesty the Sultan of Selangor is a person who is sensitive to current developments and provides solutions in overcoming humanitarian problems. Being a religious person, His Majesty is often known to advise people he meets at mosques to follow the teachings of Islam with full confidence. His Majesty is known as a caring Sultan who always has the best interest of his people at heart especially those in the state of Selangor. 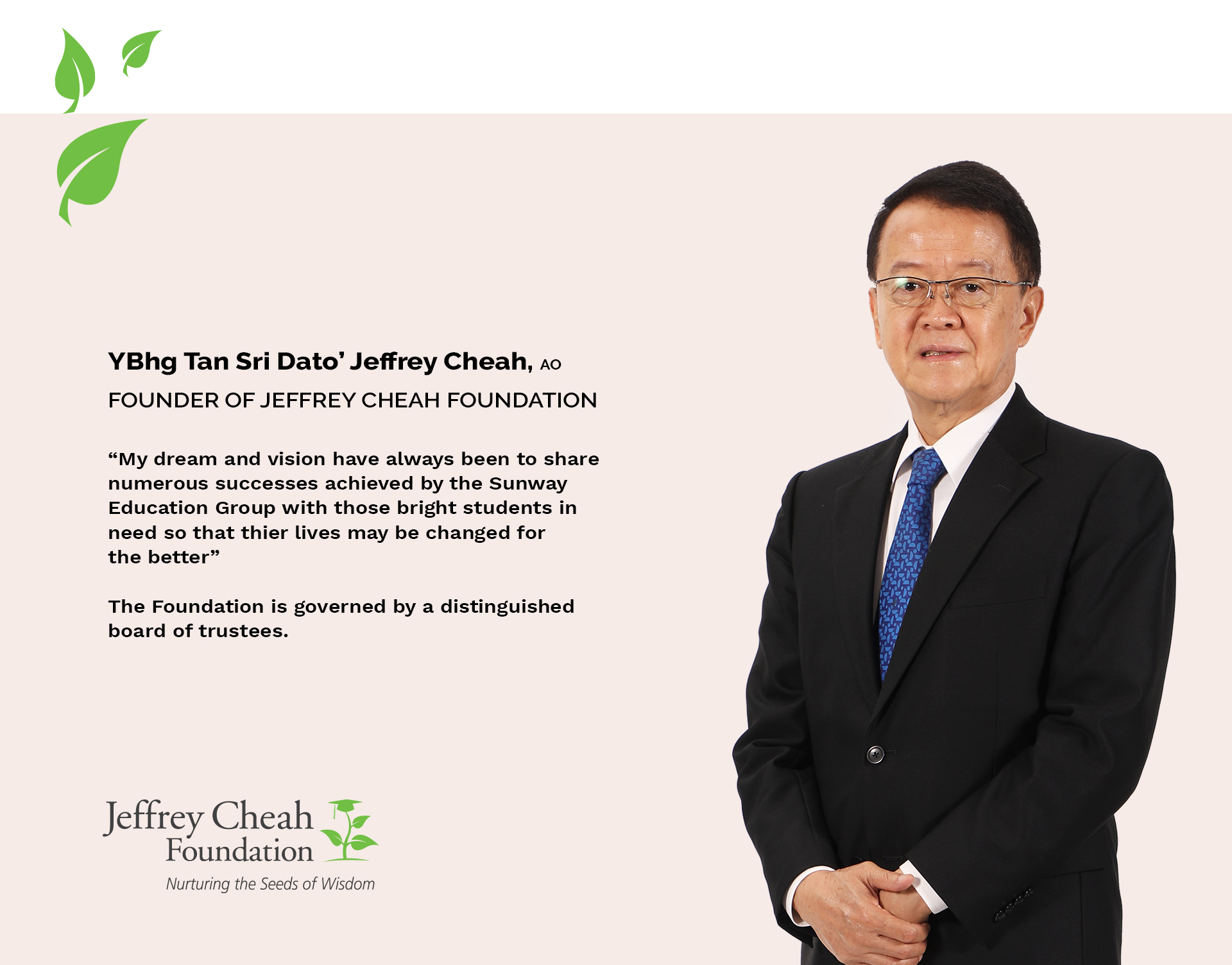 It is often said that the key to a meaningful life and true satisfaction is when an individual gives back to society and leaves behind a lasting contribution that makes a real difference. So it is indeed significant and meaningful for me that this adage is epitomised in the launch today of the Jeffrey Cheah Foundation.

This Foundation is unique in the sense that it is the first-of-its-kind in Malaysia for private education institutions. It is modeled after what John Harvard did for Harvard University over 380 years ago. The history behind the Jeffrey Cheah Foundation dates back to more than two and a half decades. It is closely linked with the evolution of Sunway Education Group as a pioneer, innovator and catalyst in the field of private education in Malaysia. Sunway pioneered the concept of the twinning programmes, which has since become popular in Malaysia, and revolutionised the local higher education landscape via partnerships with good universities from around the globe. The institutions in the Sunway Education Group have since produced thousands of capable and high-calibre graduates.

I have always believed that the business of education is more than just “a business” for successful and dedicated corporations like the Sunway Group. Education becomes meaningful when it acts as an effective means to enrich lives and to contribute to the progress of our country, by raising among other things, the quality of our human resources.

My dream and vision have always been to share numerous successes achieved by the Sunway Education Group with those bright students in need so that their lives may be changed for the better. That is the reason why the Sunway Education Trust was established in 1997. Since its inception, the Trust has benefited bright and deserving Malaysian students to further their studies. To date, more than RM50 million worth of scholarships has been awarded.

In order to perpetuate this benevolent effort and crystallise my personal vision of leaving behind a credible vehicle that will serve the cause of bringing good and quality education to our nation, I have formed the Jeffrey Cheah Foundation. Into this Foundation, I have transferred all the shares held under the Sunway Education Trust, and they will be held there for perpetuity and can never be sold.

The Foundation seeks to receive and administer funds for educational, scientific, medical and charitable purposes, including offering scholarships based on merit and to students in need of financial assistance. This charitable Foundation has also been granted tax exemption by the Inland Revenue Board – granting tax deduction for all donations to the Foundation.

The Foundation is governed by a distinguished board of trustees.

I have confidence that it will continue to perpetuate my legacy of giving to society; surpluses from the institutions in the Sunway Education Group – namely, 100 per cent equity in Sunway University College, a majority stake in Monash University Sunway Campus and several other education subsidiaries – are reinvested in the educational institutions for further development and for disbursement of scholarships, research grants and other scholastic awards.

I take this opportunity to thank the Ministry of Higher Education and other government authorities for their support. It has enabled us to contribute to the development of the private higher education industry in general and the building of quality education in particular. This has benefited many of our Malaysian students as well as drawn international students to study in our country.

My gratitude also goes to the staff and colleagues in the Sunway Education Group, who have over the years with their dedication and hard work, contributed to making this Foundation a reality.