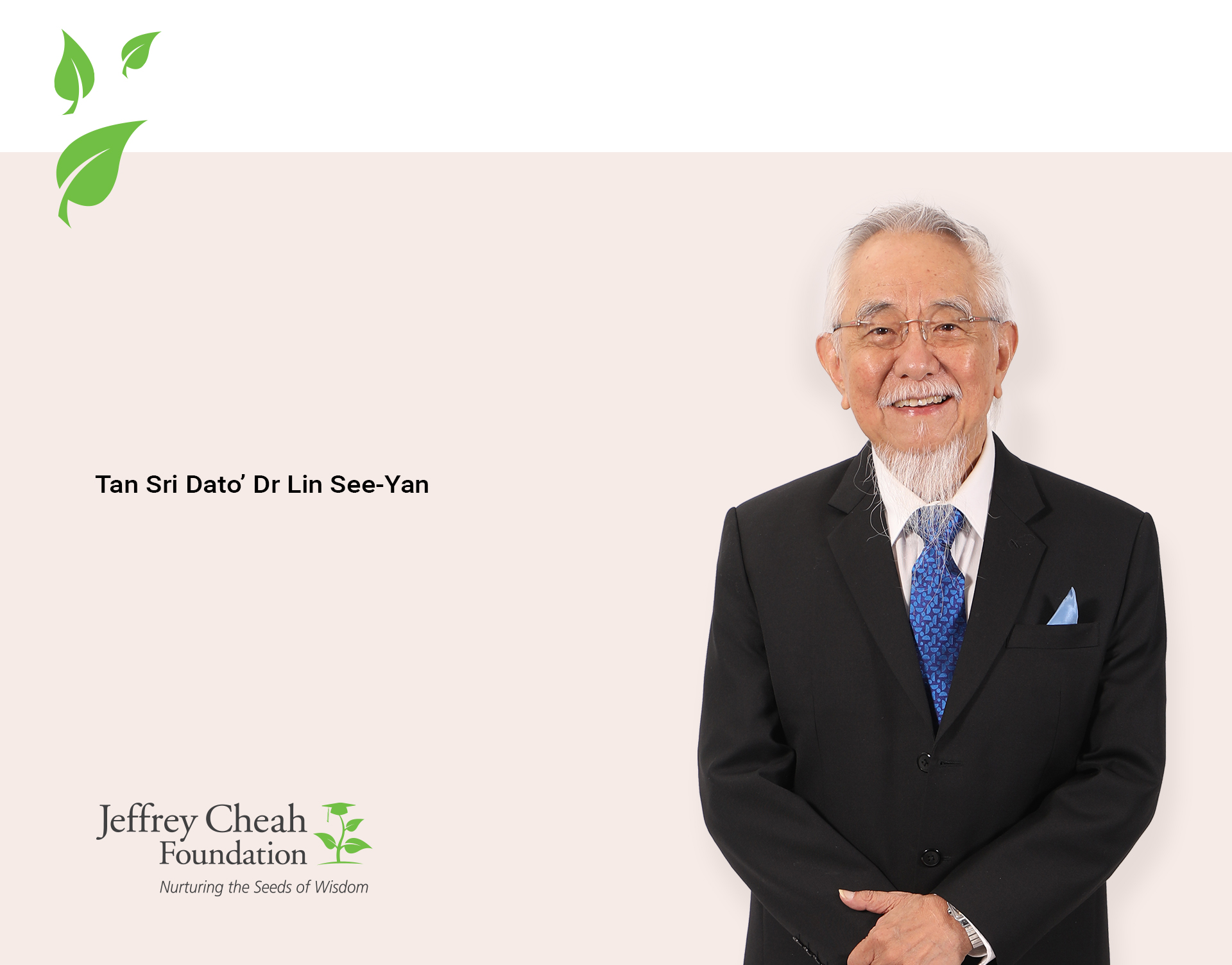 Tan Sri Dato’ Dr Lin See Yan was appointed to the Board of Trustees of Jeffrey Cheah Foundation on 28 December 2007.

He is a corporate strategy and financial consultant. Qualified as a Chartered Statistician, he graduated from the University of Malaya in Singapore and Harvard University (where he received three degrees, including a PhD in Economics). He is also a British Chartered Scientist, London; Professor of Economics (Adjunct), Universiti Utara Malaysia; Professor of International Finance & Business (Adjunct), Universiti Malaysia Sabah; as well as an Eisenhower Fellow and a Fellow of the IMF Institute (Washington DC); Royal Statistical Society (London); Malaysian Institute of Bankers; Malaysian Insurance Institute (Hon.); Malaysian Institute of Management and Malaysian Economic Association. He is also a Distinguished Fellow of the Institute of Strategic and International Studies.

Tan Sri Dato’ Dr. Lin has a long and distinguished history of service with the Government of Malaysia and the private sector. He was Chairman/President and Chief Executive Officer of the Pacific Bank Group and for 14 years previously, the Deputy Governor of Bank Negara Malaysia, having been a central banker for 34 years. Tan Sri Dato’ Dr Lin continues to serve the public interest after his retirement. Among his current appointments are Member of the Prime Minister’s Economic Council Working Group; key member of Steering Committees at the Ministry of Higher Education; member of the Asian Shadow Financial Regulatory Committee; Governor, Asian Institute of Management, Manila; Director, Monash University Malaysia Sdn Bhd; Chairman Emeritus, Harvard Graduate School Alumni Council at Harvard University in Cambridge (USA); President of Harvard Club of Malaysia and Economic Advisor to the Associated Chinese Chambers of Commerce & Industry Malaysia. In addition, he is a Trustee of the Tun Ismail Ali Foundation (PNB), Harvard Club of Malaysia Foundation, Malaysian Economic Association Foundation, Jeffrey Cheah Foundation and Program Pertukaran Fellowship Perdana Menteri Malaysia.

Tan Sri Dato’ Dr. Lin was appointed to the Board of Sunway on 18 March 2015. He also serves as Chairman of Risk Management Committee as well as a Member of the Audit, Nomination, and Remuneration Committees.